From the Prairies to Ontario

The Second World War had concluded. My father was home from his service in the Canadian Air Force. Canada had the role of trainer of pilots and aircrew for the Allied war effort under the British Commonwealth Air Training Plan, an agreement signed in December 1939 by Canada, Great Britain, Australia, and New Zealand. Dad was one of the aircraft maintenance personnel that prepared aircraft, so he was stationed in Ontario, Vancouver and Skagway, Alaska. He had never shipped overseas.

Following he war my father and mother worked in their home town of Hepburn Saskatchewan but opportunities to advance oneself were absent so they chose the great adventure of moving east, to the golden triangle, the Niagara Peninsula, and specifically St. Catharines, the Garden City. I was four years old. 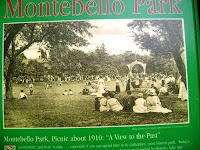 My parents found a run down wooden shack on Geneva Street in which they could live as they looked for work and settled into this new life. My mom was pregnant. I remember this place being back from the busy road, and consisting of one room, with a curtain pulled over the section where mom’s and dad’s bed was. An out house serviced us. Sunlight shone between the wall boards so before winter, my parents moved into a home owned by my Uncle Ed Willems. 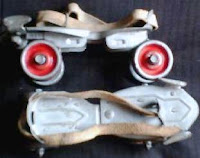 On September 7th 1947 my bother, oops Freudian slip, my brother Murray was born. He was a beautiful looking little guy. It was maddening. He got so much attention. As he grew he had the blond, curly hair and blue eyes. I recall the day of his birth because after sharing with me his good news of a second son, my father took me to Montebello Park and gave me a gift box in which I found a pair of roller skates, the kind that are fastened to shoes with a tightening key. They are also known as quad skates. He sat and watched me for a long time as I skated around the wooden pavilion. The gift was not only celebrative of Murray’s birth but in anticipation of my birthday the following week, September 13th when I turned five years of age. 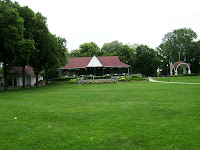 Montebello Park is located on Ontario Street, in the heart of the downtown area. With an adjacent band shell that still hosts musical concerts today. Montebello Park remains a prominent memory from my childhood and young adult years. On Sunday night my parents would walk with us to sit on a blanket to hear a summer evening concert. Often Mom brought some snacks for us to munch on while we listened. It was in the rose garden of this park that Christine and I and our wedding party had our pictures taken when we began our life together as husband and wife on August 12, 1967. 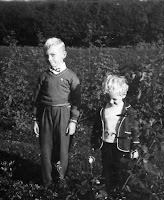