Okay that was fun.
On Saturday the 25th, the same day that I held my garage in frigid February temperatures, I attended a special event at which I showed my paintings. 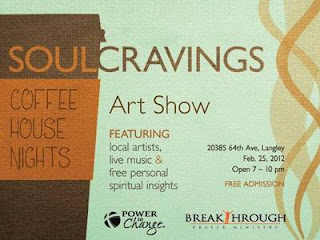 Power to Change have this impressive rotunda area, a room really with high and low tables and comfortable leather chairs and loveseats and a center 4-sided column with a large screen monitor on each side. In that room some great food was served and live music was played and conversations were evening long. Good venue.

The evening was a pleasant experience for me with enjoyable conversations with many people, some tasty food, and I sold one painting.

There may be an attempt to purchase the old Rogers video building on 56B Ave in Langley to create a Coffee House, and multi-purpose ministry centre in the downtown Langley area.
Posted by Ron at 5:24 AM No comments: Links to this post 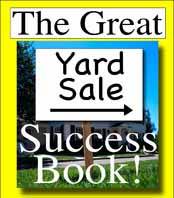 Yesterday’s sale went so well that I have written a book, available soon at Chapters. The sunny sky on the cover is just a ruse. Among the real secrets to success are (1) Choose the most inclement weather possible. (2) Count upon habitual sale enthusiasts and addicts. (3) Have a daughter in law secretly promote the sale on Craig’s list. (4) Offer crap because that’s what people want most. (5) Don’t worry about stuff left over, because Penny Pinchers and Sally Ann will accept the rest. (5) Be happy with $130 for your $600 worth of OK used goods. (6) Have a son in law who will stand with you in below zero weather. (7) Enjoy good friends popping by for a chat.
Posted by Ron at 5:28 AM No comments: Links to this post

YOU CAN’T SLEEP IN THE SURREY PUBLIC LIBRARY

YOU CAN’T SLEEP IN THE SURREY PUBLIC LIBRARY

At least that is true in the Cloverdale branch of SPL. I found out today.

It was close to 10:00 AM. and only one other senior was in that library section with me. Our house is listed and some potential buyers were touring our home so I popped in to the library before going to the Cloverdale Recreation Centre for my daily workout.

A very gentle man, a librarian walked up to me at a table where I sat with my Starbucks Pike’s Peak beside my notepad, an open Artist's magazine in front of me and two newspapers through which I had skimmed.

He spoke softly, "Sir, Sir” and I immediately opened my eyes to his notification that “you can’t sleep in the library.” I guess Karen Anne Klein and her article on watercolor and colored pencil had lost the wow factor for me and I had dozed off.  I’m an early riser and I love my quiet mornings but I suppose my 4 AM start had caught up.

Now I ask you, “did you know that there was such a prohibition?” As I listened to the temperate words from his agreeable face I was okay with it and alertly said, “There is actually a no sleeping rule?” He said, “Yes.” I added, “I didn’t know that,” and then, “but I understand.” And I actually did. Instantly I recognized the need to discourage non tax paying people from using the warm atmosphere of this publicly funded library as a dozing station. Then I questioned myself. How many people per day close their eyes in this place and knock off inadvertently only to be whispered awake by the siesta supervisor, the snooze sentry, the slumber sentinel.

Then I thought I had likely responded too hastily that I understood the rule because I began to feel that the librarian might have exercised a bit more discernment before waking me. I thought, he could have looked at me and easily concluded that I likely had a residence nearby. After all, I didn’t think that I looked destitute, but then, who’s to say? I wore a black ball cap with the embroidered label ‘MISSION Estate Winery,’ a souvenir picked up in New Zealand when I visited my friends Peter and Beryl.  I had on a black Nike sweatshirt and old faded jeans and Saucony sneakers.  I suppose someone might look at me and think I had plucked this stuff from a good will bin.

When I left, I climbed into my sports car and drove to the Rec Centre.

So a rule is a rule. There is no discrimination in my local library branch. The rule applies equally to all of us. I must come here a bit more rested next time.
Posted by Ron at 3:59 PM 4 comments: Links to this post