DUCT TAPE & NEW SNEAKERS - I use my sneakers daily. Really. I hit the gym by 6 AM each day and I walk a lot, run a little, cycle a bit, sometimes row and I burn as many calories as I have the energy and endurance to do.  But all that activity has rubbed cavities in the vertical padding of the heels so to avoid blisters I have duct taped my heels. Yesterday I decided to stop squandering duct tape and buy a new pair of shoes instead. At Sportcheck I hit a sale, buy one pair and get a second pair at half price.

RYAN NEEDED SHOES – Ryan is my ten-year old grandson. This week I noticed his skater shoes were worn out. Holes in the soles and water in his socks. So I decided that he would be the beneficiary of my second pair of shoes at half price, so he and I went shopping. He wanted high tops and he chose a pair of Nikes that he loves. We had fun together.

SLURPIES AND RICHES – Kale is seven years of age and I pick him up from school twice each week. Invariably he asks me whether we can stop for a slurpy, slushy or whatever they may be called. Stupid sugared-icy drinks are $1.40 or more. So I tell Kale not to ask me every time we see each other. He says he has only asked twice so he already knows how to yank my chain. I pull into a store parking lot and he asks, “what are you going to get, a slurpy?” I say, “it costs too much and I don’t have any money.” Kale tells me “All grandparents have lots of money.” So I explain that his father has money because he works, but I don’t work any more so I don’t receive any money. He does a mock crying act. Then I go in and get a four flavoured slurpy for him.  He is thrilled and so am I.

EXERCISING DAILY, BURNING CALORIES – I do my best to lose weight, so my gym work aims to burn as many calories as possible. So far since mid January I am down 34 pounds but I have plateaued for five weeks. It has frustrated me but my body seems to have said it is comfortable.  In the early weeks, drinking my eight glasses of water was a secret to my eight loss. So recently I have resumed that diligent H2O intake and in two days I have lost 2.5 lbs.

ELECTRONIC FRUSTRATION – since our move to our new carriage home two months ago we have endured sporadic dropped Wi-Fi signals with our laptops and I hate the interruptions so much and the hassle of calling TELUS and sitting for hours with technicians located somewhere in the world. I was directed to someone called June, a young Philippino who works for a TELUS subsidiary in Manila. So he speaks with me by phone and I give him permission to control my computers and watch the icon open files and change instructions and fix my dysfunction.  He has been very effective and finally directed an authorized service provider to visit me and replace my TELUS modem.

Last night Christine and I walked from our home into Langley to the Willowbrook Mall and got a couple of Starbucks coffees and set outside on a mild evening and watched people as they came and went. After a pleasant walk home, we watched Nic Wallenda of the famous Flying Wallenda family, walk a steel cable spanned across the Niagara Falls. It was dramatic, carefully planned with adequate safety and television coverage. It was a grand production that benefitted him certainly, but both the American and Canadian cities bearing the Niagara Falls name. It was a surprise to hear his faith expressed via a mike hookup as he walked through the mist and the winds stirred by the roaring waters. He talked to God the Father the entire trip across from the USA to Canada.

Posted by Ron at 10:32 PM No comments: Links to this post

Monday is the day on which my mother would have celebrated her birthday. She is no longer with us. She left this world in November 2007. Were she here, she would be 93 years of age. 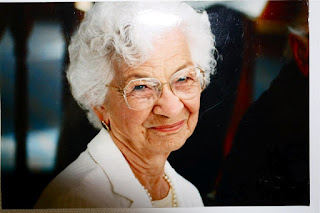 Dementia and the physical incapacities of aging made her last years difficult for her and those who loved her. You will all understand when I say that when she passed away, it was met by her family with sadness, gratitude that she could be gone, and relief. None of those emotions were wrong or are wrong. My father had found the last year or more so hard that he needed my brother's presence just to make the visits to his beloved wife that he wanted to make. Dad concealed the depth of his own loss as privately as he had always lived with personal matters. He seemed adjusted to life alone. He was four years older than his wife, Tina. Yet at last, the emptiness was enough. He too could no longer sustain life and six months after Tina died, Ed too said goodbye, privately and alone. Dad was gone at 93 years of age and were he alive he would be 97. 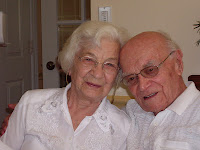